ANY MAGAZINE TO RELEASE "The Virtual House" September 9, 1997

ANY 19/20, a special double issue organized with John Rajchman, philosopher, author, and lecturer, explores the results of an architectural competition and conference sponsored by ANY magazine and Franz Schneider Brakel GmbH + Co. [FSB] entitled THE VIRTUAL HOUSE held in Berlin, Germany.

The issue features the works and comments of six prominent architects commissioned to explore the idea of the virtual through the unbounded program of a house. Their projects and the challenge that the virtual represents for architecture today are discussed by architectural historian Kurt Forster, artist Rebecca Horn, and economist and urban theorist Akira Asada. The premise for the commission to design a virtual house is developed in essays by seven international philosophers who address the idea of the virtual as part of a larger attempt to understand the notion of potential outside the given identities of form, function, place.

ANY is published six times a year by the Anyone Corporation, a not-for-profit architectural think tank that has been called "one of the most ambitious and adventurous projects in the history of architecture." The name ANY reads both as something undecidable [ANY magazine] and as an acronym for Architecture New York. In its pages architects, critics, theorists, artists, and others address architectural issues bearing on contemporary culture.

Future issues include 8 on 8 (8 critics on 8 buildings), the subject of a May 3, 1997, symposium at the Guggenheim Museum, and an analysis of the MoMA expansion. ANY's striking design by the New York studio 2x4 has also brought it international acclaim. Subscriptions to ANY are $45 for six issues in the U.S. and $65 abroad. The magazine is also distributed internationally at select bookstores. 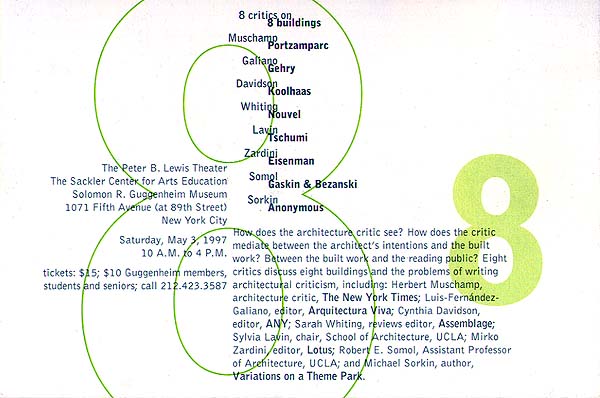 ANY magazine and Franz Schneider Brakel GmbH + Co. [FSB] will present the results of an architectural competition at a conference entitled THE VIRTUAL HOUSE in Berlin, Germany, from March 20-21, 1997. The conference will take place at the Deutsches Architektur Zentrum [DAZ], K­penicker Straþe 48/49, Berlin.

Organized by ANY with John Rajchman, philosopher, author, and lecturer, The Virtual House challenges seven architects to explore the idea of that 'which, through its plan, space, construction, intelligence, generates the most new connections. It is part of a larger attempt to understand the notion of potential outside the given identities of form, function, place, and it leads to the following principle: the world that is best is the most 'multiple' one, the most virtual one. It is the one that most catches us by surprise in our very manners of thinking and being.'

The architects and others will meet in Berlin on March 20 and 21. Beginning on Thursday, three philosophers will speak about the idea of the virtual. On Friday, the seven architects will present their projects, after which three invited critics will lead a public discussion about the work and name the competition winner.

The proceedings of The Virtual House will be published in ANY #20, guest edited by John Rajchman.